Lewis Terman, – ‘An ability to think on an abstract level is called Intelligence.’

David Wechsler, – ‘Intelligence is the aggregate or global capacity of an individual to act purposefully, to think rationally, and to deal effectively with his environment.’

The American Psychological Association (APA) defines intelligence as the ability to derive information, learn from experience, adapt to the environment, understand, and correctly utilize thought and reason.

In short, they define intelligence as the ability to learn from one’s experiences, acquire knowledge, and use resources effectively in adapting to new situations or solving problems (Sternberg & Kaufman, 1998; Wechsler, 1975). These are the characteristics that individuals need in order to survive in their culture.

Fluid and Crystallized Theory of Intelligence by Cattell

Raymond Cattell was a British psychologist. He spoke about two types of intelligence –  fluid and crystallized.  (1968) This typically occurs in everyone. Fluid Intelligence – described as the ability to develop techniques for solving problems. It included problems that are new and unusual. Generally, from perspective of problem solver. This intelligence is based spatial and visual imagery.

According to the Theory of Intelligence by Cattell, fluid intelligence is dependent on neurological development and it is relatively free from the influences of learning and experiences. Moreover, It represents the ability to adapt in unfamiliar situations.

For example, while writing an exam, a question has words that are different from your textbook. It is your fluid intelligence that figures out that the question is regarding a topic you studied.

It can be measured by tests of –

Crystallized intelligence is referred to the ability to use previously acquired knowledge for problem solving. In fact, it is often culturally defined. In addition, it shows the individual’s problem-solving methods to bear on the current problem. It is based on reasoning, problem solving, and verbal skills.

It is not dependent on one’s neurological development. This type of Intelligence is a function of one’s acquired experiences and stock of knowledge. In addition, an individual’s educational attainment.

For example, when it comes to remembering the answer to a question in exam and presenting it in necessary format, your crystallized intelligence is at work.

It can be measured through tests of –

John Horn’s addition to Theory of Intelligence by Cattell

John Horn expanded on Cattell’s work and added other abilities based on following aspects. (Flanagan & Dixon, 2013)

Development of Fluid and Crystallized Intelligence across life span 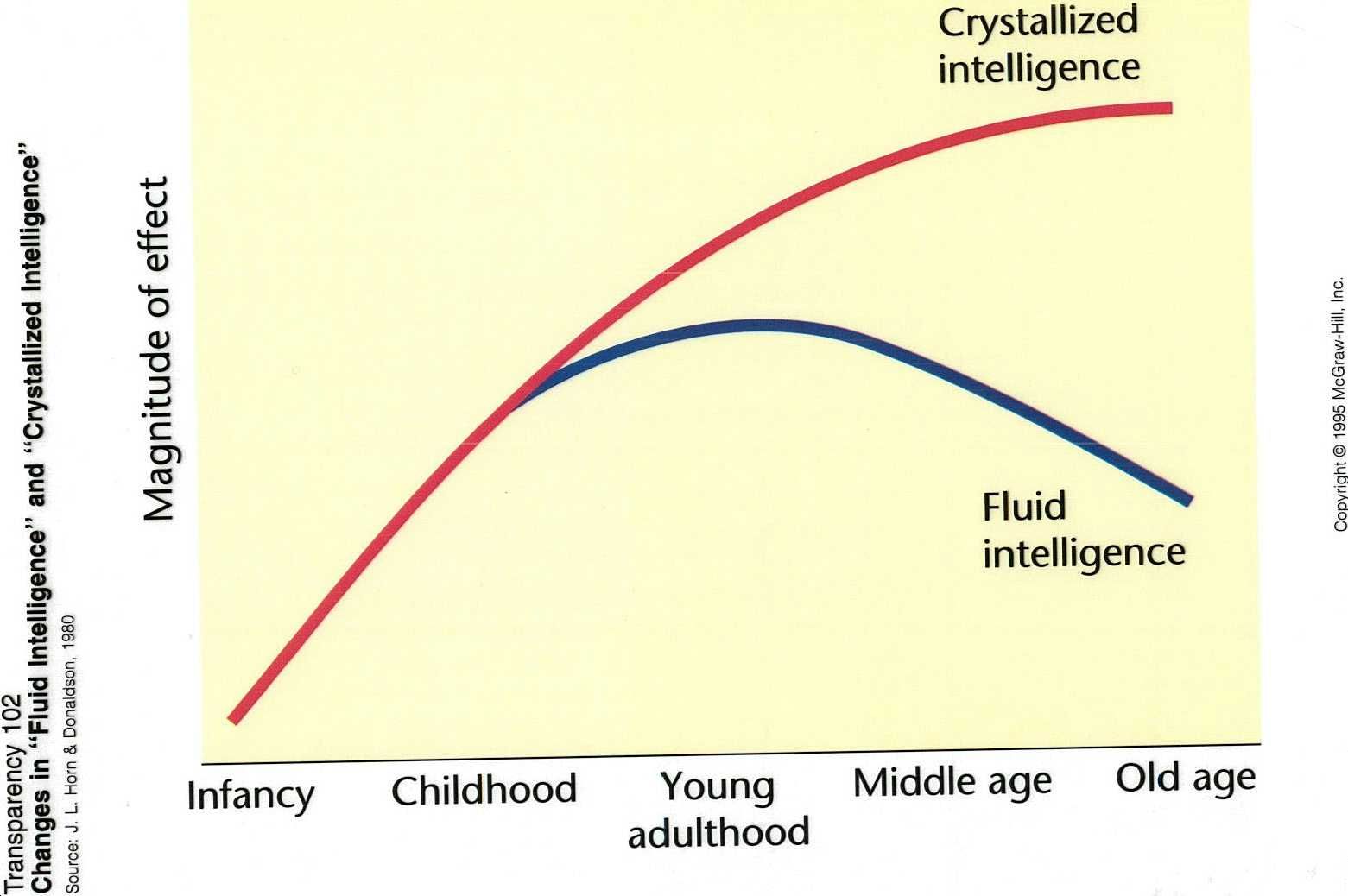 However, recent research shows that certain parts of fluid intelligence may not peak until the age of 40.

On the other hand, Crystallized Intelligence develops gradually. It remains stable throughout adulthood. It starts to decline after age of 60 (Cavanaugh & Blanchard-Fields, 2006).

Criticism of Theory of Intelligence by Cattell

The information cited in a paper leads to the conclusion that “Cattell’s” theory of fluid and crystallized intelligence is Hebb’s theory of Intelligence A and Intelligence B. In fact, Cattell gave it another name and popularized it. Hence,  Cattell’s theory was Hebb’s idea.

Hebb sent Cattell the typescript of his lecture and 1942 paper in press, to show that he had explicitly stated his ideas. Cattell added a statement to his 1943 paper that Hebb and he had independently come up with the same idea.

Moreover, Hebb helped edit the section of Cattell’s paper that showed how Cattell’s ideas differed from his own. Although, Cattell had a feeling that he gave Hebb more credit than he was due, Hebb was overly gracious in not insisting that he had developed the ideas before Cattell.

Therefore, the theory of fluid and crystallized intelligence should be called the Hebb-Cattell Theory.

To check your understanding of the topic, take this short test –
MCQ Test on revise Cattell’s Theory of Intelligence