Home »Foundations of Psychology»What is perception & its core approaches as per different psychologist ?

Basic meaning of perception is Organization, identification, and interpretation of sensory information in order to represent and understand the environment.

Perception is a process of selecting, organizing & interpreting the sensory information based on previous experiences, other’s
experiences, need or expectation.

Perception is the psychological process responsible for our interpretation of the world.

Perception is the set of processes by which we recognize, organize, and make sense of the sensations we receive from environmental stimuli (Goodale, 2000a; Pomerantz, 2003).

According to American psychological Association, perception is, ‘the process or result of becoming aware of objects, relationships, and events by means of the senses, which includes such activities as recognizing, observing, and discriminating.’

Stage I: Selection- Our brain has limited capacity, thus, it cannot attend to all stimuli. We unconsciously / consciously select some stimuli and ignore others.

Stage II: Organization– Here, stimuli are arranged mentally in a meaningful pattern. It is an unconscious process that depends upon the Gestalt principles of organisation. It will help you understand how humans naturally organize stimuli to make a meaningful pattern and interpret it so.

Stage III: Interpretation – Here, we assign meaning to the organized stimuli. Interpretation of the stimuli is based on one’s experiences, needs, beliefs, expectations,  and other factors. Thus, this stage is subjective in nature and the same stimuli can be interpreted differently by individuals.

There are two theoretical approaches to explain the process of perception.

James Gibson (1966) provided us a useful ‘classic approach’ for studying perception. through these

Gestalt psychology-concerned with how people apprehend whole objects, concepts or units. Three German psychologists Max Wertheimer, Wolfgang Köhler and Kurt Koffka proposed new principles of perception called as Gestalt principle. The Basic premise is ‘the whole is greater than the sum of its parts’.

How we interpret stimulus arrays as consisting of objects and backgrounds?

There are five major principles. They are as follows-

1. The principle of proximity or nearness –

2. The principle of similarity –

3. The principle of continuation –

4. The principle of closure

5. The principle of common fate 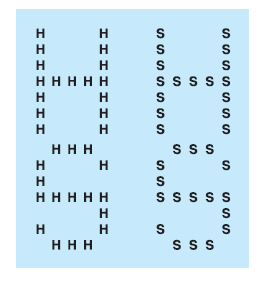 1.Motivation or Need- Stanford (1936) found that hungry participants perceived ambiguous stimuli more as food-related stimuli than non-hungry participants. Changizi and Hall (2001) Showed that your need for thirst could also affect perception.
2.Expectation- Bruner & Minturn (1955) illustrated the role of expectation in our perception. Ambiguous figure of ‘13’ in the context of numbers and in the context of alphabets
3.Emotions-  When you are a fan of a particular IPL Team and the umpire makes a call against your favourite team, you will most probably perceive the umpire as partial. When your perception task is relevant to emotions, it facilitates the performance (Dodd, Vogt, Turkileri, & Notebaert, 2016)
4.Stimulus Characteristics- Noticed horns as danger – why? Because of evolution we attend few stimulus differently.
5.Experiences- If you mistakenly perceive a rope as a snake in the dark, then your previous experience is guiding your perceptual process. and vice versa
6.Culture- Ethnographic studies suggest there are cultural differences in social understanding, interpretation, and response to behavior and emotion.