a physician by profession, was the major contributor of psychoanalytic theory of personality. He developed his theory while doing clinical practice with patients. “Unconscious mental processes” is the center of Freud’s Psychoanalytical Theory of Personality. It refers to those desires, needs, and motivations for which we are not aware. Further, according to Freud, aspects of human behavior such as aggression and sexual desires also plays an important role in our personality.

According to Freud, the unconscious is a reservoir of instinctive or animal drives. It also stores all ideas and wishes that are concealed from conscious awareness, perhaps, because they lead to psychological conflicts. Most of these arise from sexual desires which cannot be expressed openly and therefore are repressed. People constantly struggle to find either some socially acceptable ways to express unconscious impulses, or to keep those impulses away from being expressed. Unsuccessful resolution of conflicts results in abnormal behavior. Analysis of forgetting, mispronunciations, jokes and dreams provide us with a means to approach the unconscious. Freud developed a therapeutic procedure, called psychoanalysis. The basic goal of psychoanalytic therapy is to bring the repressed unconscious materials to consciousness, thereby helping people to live in a more self-aware and integrated manner.

Freud proposed that our personality consists of three elements namely, Id, Ego and Superego. Before explaining in detail, it is important to mention here that id, ego and superego are just concepts and they do not have any physical or physiological basis.

Id is the source of a person’s instincts and impulses. It deals with immediate gratification (fulfillment) of primary needs, sexual desires and aggressive impulses. And, it works on the pleasure principle, which assumes that people seek pleasure and try to avoid pain. Freud considered much of a person’s instinctual energy to be sexual, and the rest as aggressive. Id does not care for moral values, society, or other individuals. And, this part of personality operates unconsciously. When personality is dominated by id, then the individual tends to become more impulsive. Such people will do what they want irrespective of time, place and situation, just like a child. 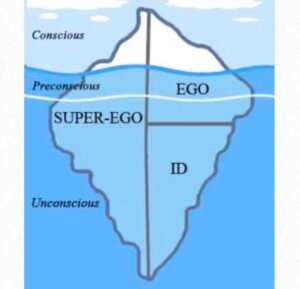 It grows out of id, and seeks to satisfy an individual’s instinctual needs while balancing with reality. It works by the reality principle. And, often directs the id towards more appropriate ways of behaving. For example, the id of a boy, who wants an ice-cream cone, tells him to grab the cone and eat it. His ego tells him that if he grabs the cone without asking, he may be punished. Working on the reality principle, the boy knows that the best way to achieve gratification is to ask for permission to eat the cone. The id is demanding, unrealistic and works according to pleasure principle.

On the other hand, ego is patient, reasonable, and works by the reality principle. In the words of Freud, “ego is that part of the id which has been modified by the direct influence of the external world” (Freud, 1923). If ego would not be able to resolve the conflict between the impulsive demands of the id and realistic demands of this world, then it would lead to the development of anxiety and stress. To ward off this anxiety, individual will be motivated to use unconscious defense mechanisms.

The best way to characterize the superego is to think of it as the moral branch of mental functioning. The superego tells the id and the ego whether gratification in a particular situation is ethical. It internalizes the parental authority through the process of socialization. As a result, controlling the Id. For example, if a boy sees and wants an ice-cream cone and asks his mother for it, his superego will indicate that his behavior is morally correct. So, this approach towards obtaining the ice-cream will not create guilt, fear or anxiety in the boy. This part of our psyche develops between the ages of three to five years.

Further, according to Freud, our superego consists of two systems: (i) conscience (ii) ideal self. The conscience’s role is to punish or reward ego, through the feeling of pride or guilt, depending on its behavior The second system, the ideal self is idealized picture of your own self, also does the job of making you feel guilty or pride, depending on your behavior.

A newborn’s instincts are focused on the mouth. This is the infant’s primary pleasure seeking center. It is through the mouth that the baby obtains food that reduces hunger. The infant achieves oral gratification through feeding, thumb sucking, swallowing, biting and babbling. It is during these early months that people’s basic feelings about the world are established. Over gratification or under gratification may lead to the fixation at this early oral stage resulting into the development of over-eating behavior, drinking or smoking in adulthood. As a result, Freud called such people as oral-incorporative or oral-ingestive.

Later during this stage, children experience pleasure from chewing and biting. Unable to resolve the psychological conflict of this stage may develop the habit of nail biting and object chewing in adulthood. Further,  Freud pointed out that these people are more critical and sarcastic in nature. He referred such people as oral-aggressive or oral-sadistic. Thus, for Freud, an adult who considers the world a bitter place probably had difficulty during the oral stage of development.

This stage focuses on the genitals. Genitals become the erogenous region during this stage. Phallic word comes from the Greek word Phallos which means penis. Children knowingly or unknowingly touch their genitals for pleasure. And, at around ages four and five children begin to realize the differences between males and females. They become aware of sexuality and the sexual relationship between their parents.

Freud proposed that male child experiences Oedipus complex, which involves sexual feeling towards their mother, feeling of rivalry for the father, as well as a threat of getting punished by the father for having a desire for mother. The counterpart of Oedipus complex is Electra complex, experienced by female child. It involves the sexual attraction for father, feeling of rivalry for mother and a threat of getting punished by the mother for having this feeling towards father. So, successful resolution of this complex develops mature sexual identity. According to Freud’s Psychoanalytical Theory of Personality, by the end of this stage, the personality forms completely.

This stage lasts from about seven years until puberty. During this period, the child continues to grow physically, but sexual urges are relatively inactive. Much of a child’s energy is channelized towards education, sports and social activities. As a result, this leads to no or little interest for the opposite gender.

During this stage, the person attains maturity in psychosexual development. The sexuality, fears and repressed feelings of earlier stages are once again exhibited. People learn to deal with members of the opposite sex in a socially and sexually mature way. However, if excessive stress or over indulgence marks the journey towards this stage, it may cause fixation to an earlier stage of development.

Unresolved issues of previous psychosexual stages will start exhibiting during adulthood, leading to difficulty in establishing healthy intimate relationship with the opposite sex. Freud’s theory also postulates that as children proceed from one stage to another stage of development, they seem to adjust their view of the world. However, failure of a child to pass successfully through a stage leads to fixation to that stage.

A criticism of Freud’s theory concerns the people upon whose dreams, recollections, and comments the theory of psychoanalysis was based. Although, Freud’s clients were almost all wealthy Austrian women living in the Victorian era of sexual repression. Critics state that basing his theory on observations, made with such a demographically limited group of clients promoted his emphasis on sexuality as the root of all problems in personality. As women of that social class and era were often sexually frustrated. Freud rarely had clients who did not fit this description, and so his theory is biased in terms of sexual frustrations (Robinson, 1993).