Home »Foundations of Psychology»What is Forgetting? Its Theories 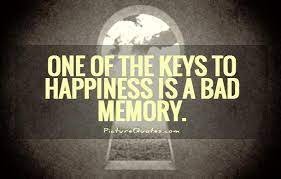 Forgetting is failure to retrieve information from long term memory store. Much of the information is lost but enough remains, so that we have sketchy record of our lives.

Forgetting is opposite to learning. In leering person keeps a thing in memory, while in forgetting s/he fails to bring to the conscious plain what s/he has remembered.

Some students complain that they do not remember the contents after attending the class or forget after reading the text. Why? This happens due to lack of attention, some information does not reach short term memory from the sensory register or due to inadequate encoding and rehearsal, the information may not have been transferred from short term to long term memory. Information was not stored in long term memory because rehearsal was not sufficiently elaborate.

According to Drever James, ‘ Forgetting means failure at any time to recall an experience When attempting to do so, or to Perform an action previously learned.’

Nunn defined forgetting as Failing to retain or able to recall What has been acquired.

Hermann Ebbinghaus (1913), first researchers who study forgetting by using “nonsense syllables (WOL, GEX),” He found that spacing out one’s study sessions (distributed practice) will produce far better retrieval of information studied in this way than does massed practice, or study all at once. 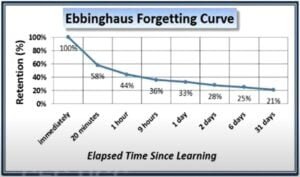 A memory trace is some physical change in the brain, in a neuron or in the activity between neurons, which occurs when a memory is formed (Brown, 1958; Peterson & Peterson, 1959). If these traces are not used, they may decay, fading away or become unavailable. Information that is not brought to attention in sensory memory or continuously rehearsed in short-term memory (STM) will fade away. Long term Memory (LTM), decay theory is called disuse, and the phrase “use it or lose it” takes on great meaning (Bjork & Bjork, 1992).

Limitation – Researches proved Those who remain awake after memorising (waking condition) show greater forgetting than those who sleep (sleeping condition).

It suggests that new information that enters the long-term memory (LTM) interferes with the recall of earlier
memories and therefore, interference is the main cause of forgetting. Assumption – learning and memorising involve forming of associations between items and once acquired, these associations remain intact in the memory. There are two kinds of Interferences –

It has been found that a lot of forgetting, particularly in long-term memory, is due to absence or non-availability of retrieval cues at the time of recall. The changes in context associated with physical and mental states from the occasion of learning (encoding) to recall (retrieval) often result in poor retention scores. We often “blank out” during examinations. Tulving and his associates with experiments to show that contents of memory may become inaccessible either due to absence or inappropriateness of retrieval cues that are available/employed at the time of recall.