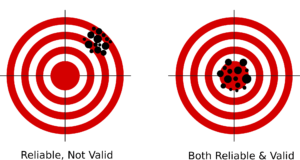 Validity refers to the question: “Does the test measure what it claims to measure”?

The word “valid” comes from the Latin ‘validus’, it meaning strong. Validity is the accuracy of test or experiment.

“Validity is the degree to which evidence and theory supports the interpretation of test scores entailed by the uses of the test.”

History of Validity or evolving concepts of validity

1st stage of development of Validity –

2nd stage of development of validity 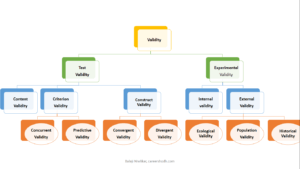 Types of validity by Careershodh

Test validity is an indicator of how much meaning can be placed upon a set of test results.

There are three types of evidence:

Face validity is the mere appearance that a measure has validity.

Items, statements, or question should be reasonably related to the perceived purpose of the test.

Face validity will be used for ability tests and achievement tests.

For example, any school / college test will have this face validity.

For instance – If a scale to measure anxiety

Items, statements, or question for face validity of anxiety test will be –

Construct underrepresentation describes the failure to capture important components of a construct.

For example, if a test of mathematical knowledge included algebra but not geometry, the validity of the test would be threatened by construct underrepresentation.

For example, many students do poorly on tests because of anxiety or reading problems

Criteria will be -Marital success

The SAT/ GRE, including its quantitative and verbal subtests, is the predictor variable, and the college grade point average (GPA) is the criterion.

Aptitude tests taking by employers, companies will another example of predictive validity.

The purpose of the test is to predict the likelihood of succeeding on the criterion—i.e., achieving a high GPA in college.

Concurrent Validity take place when the criterion measures are obtained at the same time as the test scores.

When the measure is compared to another measure of the same type, they will be related.

It shows the extent to which the test scores precisely estimate an person’s current state with respects to the criterion.

Concurrent Validity comes from assessments of the simultaneous relationship between the test and the criterion such as between a learning disability test and school performance.

Concurrent evidence for validity applies when the test and the criterion can be measured at the same time.

For example, on a test of depression, the test should have concurrent validity if it measured the current levels of depression experienced by the person who has taken test.

Most of the psychological test use this validity.

Construct validity defines how well a test or experiment measures up to its claims.

A test created to measure depression, it must only measure that specific construct, not closely related ideals like stress or anxiety.

Construct validity is if the test demonstrates an association between the scores and the prediction of a theoretical trait, concept, attribute, etc.

By the mid-1950s, researchers / investigators concluded that no clear criteria existed for most of the social and psychological characteristics they wanted to measure.

For example- measures of intelligence, love, curiosity, or mental health.

All of these tests should have construct validity.

There was no criterion for intelligence because it is a hypothetical construct.

A construct is defined as something built by mental synthesis.

As a construct, intelligence does not exist as a separate thing we can touch or feel, so it cannot be used as an objective criterion.

Construct validity can established through a series of activities in which a researcher simultaneously defines some construct and develops the instrumentation to measure it.

Tests that constructs that are expected to be related are, in fact, related.

When a measure correlates well with other tests believed to measure the same construct, convergent evidence for validity is obtained.

In each case, scores on the test are related to scores on some other measure.

However, there is no criterion to define what we are attempting to measure.

Convergent validity is obtained in one of two ways.-

Tests that constructs should have no relationship do, in fact, not have any relationship.

It shows that the measure does not include superfluous items and that the test measures something distinct from other tests.

The validity of the design of experimental research studies is a central part of the scientific method, and a concern of research ethics. Without a valid design, valid scientific deductions cannot be drawn.

Internal validity is a measure, which confirms that a researcher’s experiment design carefully follows the principle of cause and effect.

An inductive evaluation of the degree to which conclusions about causal relationships can be made (e.g. cause and effect), based on the measures used, the research setting, and the whole research design.

In-other-words there is a causal relationship between the independent and dependent variable.

External validity is about generalization: To what extent can an effect in research, be generalized to populations, settings, treatment variables, and measurement variables?

External validity concerns the extent to which the (internally valid) results of a study can be held to be true for other cases, for example to different people, places or times.

External validity can be improved by setting experiments in a more natural setting and using random sampling to select participants.

Both essential elements in judging the strength of an experimental design.

Reference books for validity and types of validity