Transactional Analysis, TA given by Eric Berne, is a psychological tool. It enables us to understand the structure or the elements that constitute our personality.

The way TA describes our personality is very simple. As a result it is devoid of any so called psycho-technical jargon. Anyone even without any background of personality psychology, can understand it.

Unlike the other theories of personality, the concepts as described by transactional analysis are not constructs, but are experienced and observable realities that can help one to easily understand one’s personality.

If you follow the insights that are given in this article on ‘Transactional Analysis’, you will find it easy to monitor your own behavior in appropriate ways. It will help you to handle your communication and relationships better. It will therefore, help you in describing yourself as a person and understanding the underlying dynamics of your behavior.


The Concept of Ego States

An ego state is a holistic set of consistent and coherent patterns of being, deciding, thinking, feeling and behaving. These can be experienced internally, and expressed externally by an individual. A

An ego state is basically something that we think and feel at a given point of time and is reflected in how we relate to ourselves and to other people.

According to transactional analysis, the building blocks of our personality are ego states. The term ‘ego state’ means a state of the ‘ego‘ or ‘I‘. Thus, the ‘I’ is central.

The word ‘holistic’ in the definition of ego states emphasizes that healthy personality is an integration of many elements. In TA we are dealing with the total experience of the individual and thus the different ego states are not limited to only any one way of functioning.

By understanding the concept of ego states in transactional analysis, we can come to know why we behave differently at different times. Once we know the why of human behavior, it is easier for us to consciously mediate and control our own behavior. This will give us a sense of freedom and responsibility.

You might find that you can apply it very well to your own life situations.

According to transactional analysis, our personality is made up of basically three ego states – the Parent Ego State, the Adult Ego State and the Child Ego State.

The parent ego state is that part of the personality which we borrow from our parents. Even from those who took their place. Basically from parental and authoritarian figures in our daily lives.

All of us, in childhood, absorb the personalities of others into our own. Usually without being conscious of it, we pick up other people’s postures, gestures, habits, ideas and expressions. This collection of attitudes, feelings, and behaviors copied from any and all significant parent figures becomes the parent ego state.

We record these ways of seeing and doing things in our brains and later in life they become almost automatic responses. When in a parent ego state, we literally behave the way our parents behaved.

The parent ego state is expressed outwardly in either of two ways – Critical Behavior or Nurturing Behavior.

The critical parent ego state is about blaming others and giving unconstructive criticism. It includes behaviors like – attacking other people, being extremely judgmental, not listening, not interested in explanation. The critical parent will write you off as a person rather than deal with your behavior.

Thus, when you see a student talking in class distracting himself and others, the teacher calls him a nuisance. This is not dealing with the behavior, but is labeling the student. When teachers do that they are behaving from the critical parent ego state.

The nurturing parent ego state is primarily concerned with looking after, nurturing and comforting people. It is rooted in understanding and tries to make people feel good about themselves. Actions taken from this state instills confidence and encourages others to go on and is full of appreciation for people and their positive behaviors.

Thus, when you congratulate a student on winning an elocution contest, you are in your nurturing parent role. The
nurturing parent supports life, growth, and self expression. It empowers a person to be a winner.

The adult ego state behaviors are about-

The adult ego state is about trying to understand why do we respond or behave in a particular
way and make a conscious choice. The typical adult behaviors are being calm, rational, analytical, unemotional, logical and reasonable.

The typical words used are Why? When? Where? What? How? Who? Does it make sense? It checks on reality before making conclusions and responses.

The photographic adult is that part of the personality which perceives what is happening in the here and now, records it in the brain, remembers it and reports on it.

Thus, when someone tells you that you had worn the same shirt in the party last week, they are in their photographic adult state.

The combining adult is that part of the personality which makes calculations using data that comes from the photographic adult and what is stored in one’s memory. It calculates probabilities, makes predictions and does most of the reasoning.

For example, combining adult manifests in you when you tell your teacher that in the forthcoming Board Examinations, you are likely to get 80 percent marks. Your prediction is based on your observation and analysis of how well you have understood the concepts and your average score in practice tests.

The child ego state is the source of our emotional responses. The child again feels the emotions which the situation originally produced in him/her. And he/she becomes aware of the same interpretations, true or false, which he/she gave to the experience in the first place.

Everyone carries this within his/her brain and nervous system. These are permanent recordings of the way –

It is like our mental tape recorder is recording events on one track (parent) and the feelings associated with those events in another track (child). In other words, the child ego state is the recording of internal events or the responses of the little person to what he sees and hears.

It is the recording of joy, surprise, amazement and all the wonderful feelings associated with our first discoveries of life on the one hand. On the other hand terror, agony and all the fearful feelings.

There are many things that can happen to us today as adults which recreate the situation of childhood.
When this happens we say that our child ego state has taken over.

The natural child behaviors are those which reflect a person’s needs and wants in an open, honest and non-manipulative way.

The natural child expresses itself spontaneously without concern about others. It is energetic, feeling, loving, uninhibited and loves fun. It feels free and does what it wants.

In it are found genetic recordings of all our primary urges

The adapted child is that part of the child that exhibits a modification of the natural child’s inclinations. These  adaptations occur in response to traumatic experiences, training and demands from significant authority figures.

Adaptations may occur in two ways: submissive or compliant child and rebellious child.

In the compliant child state, you do what other people want you to do regardless of how you feel about it.

You  behave in the way you believe other people expect or want you to behave, rather than in the way that
matches with how you feel as you would in the natural child.

Even if common sense tells you not to comply with the request, you still do.

The rebellious child is that part of the person that rebels against authority that is experienced as an imposition.

It is reasonable and makes sense. It is reactive in its behavior.

For example, you are given three substitution periods on the same day, and you go and tell your
principal that you will not go for any of them, this will be a ‘rebellious child behavior’.

The little professor is the thinking part of the child ego state. It is creative, has initiative and is manipulative.

With the little professor, the child psyches out a situation and seems to have an inborn ability to dream up new ideas, “pull the right strings” to reach a desired goal and take initiative to know what to do in a given situation.

For example. A mother scolds her son. He goes and hugs her with a charming smile. The mother forgets her anger. In this example, the son successfully changes the unpleasant situation he is in, into a pleasant one.

At any given point, a person is transacting from a particular ego state from among Parent (values), Adult (rationality) and Child ( Emotions, creativity). Transactions and communication will be healthy only when the ego states are complementary. Moreover, it also needs to be sympathetic. 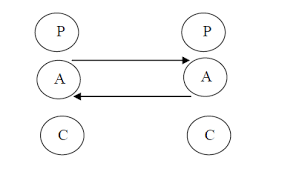 This type of transaction typically occurs when an individual targets his/ her conversation to a particular ego state of the other person and expects a response from the same. However, the other person responds from a different ego state.

We have three ego states and we need to have all three of them functioning in an integrated way, in order to lead healthy lives. Yet, each ego state has its own distinct functions. Let us see what these functions are.

The parent ego state helps persons to be good parents and to organize their own lives according to a scale of values and judgments.

Just as good parents provide substance, support, love and direction to their children, the parent ego state provides nurture, safety and regulations for ourselves and others.

It helps us to carry out countless routine tasks automatically without the need to think about them thoroughly, each time.

The adult ego state functions in updating the parent and the child. It examines the data in the parent to see whether what it prescribes is true and still applicable today.

Also, it helps to keeps emotional expressions appropriate. Individual acting from this ego state gathers and processes data in the present, tests reality and decides what course of action to take.

The child ego state in transactional analysis stands to get one’s needs met. Each child wants satisfaction of its hunger and gratification of its needs. It will express joy when gratified, and anger when frustrated.

At the same time, it wants to survive in what may appear to be dangerous situations. In short, the child ego state is used to expressing emotions, getting one’s way, being creative and having fun.

A disadvantage of TA is that it becomes necessary for the individual to have a good degree of self-awareness. Also the capacity to notice and own their behavior, emotions and thought patterns. Some clients or people may not have this capacity. So it does not apply in everyone’s case.