The idea that the right and left hemispheres of the brain (cerebral cortex) are structurally and functionally asymmetrically, wherein some specific functions are controlled more by (or entirely by) one hemisphere than the other, is called ‘cerebral lateralization’. 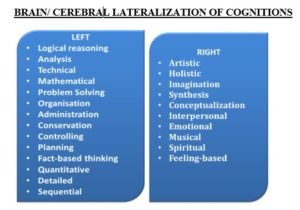 Sackeim, Gur and Saucy (1978) found that facial expressions are more intensely expressed in the left side of the face, suggesting a greater involvement of the right hemisphere in the production of emotional displays.

Some authors have also suggested that the right hemisphere might contain a store of structural representations or templates of facial expressions.

Once these templates are destroyed, by a stroke or cerebral injury for example, the capacity to recognize facial expressions could be lost.

This model proposes that the pattern of hemispheric dominance depends on the emotional valence of the stimulus.

laughing and crying, and found evidence suggesting that a damage to left hemisphere led to the onset of depressive symptoms in psychiatric patients.

On the other hand, damage to the right hemisphere was more frequently associated to a pathological laughing condition.

According to the valence hypothesis, fear, anger, disgust and sadness are considered negative emotions, and happiness and surprise are classified as positive emotions.

It has its foundation in the relationship between motivation and emotion.

According to the approach-withdrawal hypothesis, happiness, surprise, and anger are classified as approach emotions, since they indicate a drive of the individual toward the environmental stimuli.

On the other hand, sadness, fear and disgust are associated with withdrawal behaviours, because they tend to lead the individual away from the environmental sources of aversive stimulation.